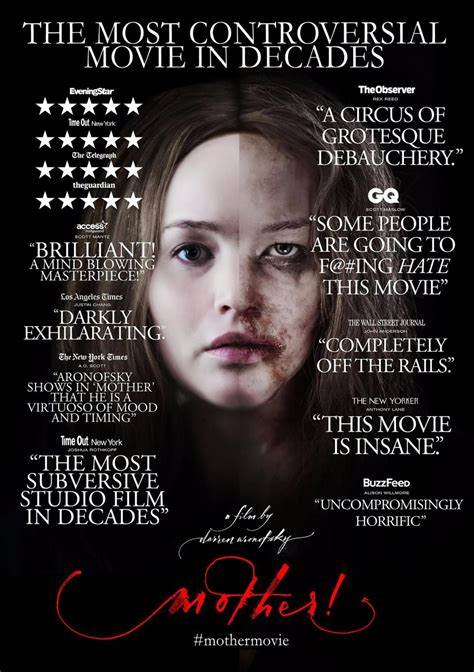 I want to tell you about this movie, but I’m not exactly sure what the heck I just watched. Mother the strangest, most confusingly terrifying entirely off the wall two hours and one minute I have ever spent sitting in front of a screen of any type. Okay, let’s start there.

Darren Aronofsky (Black Swan, The Wrestler) is one twisted son of a bitch. That said, I didn’t hate this. Kudos on the A list cast starring Jennifer Lawrence, Javier Bardem, Ed Harris, and Michelle Pfeiffer. All who do a fantastic job in the roles in which they had been cast. Did I say WTF yet?

Mother is Not Your Run of the Mill Horror Flick

Kudos to Lawrence who landed the only “Normal” role in the script. Regardless, He’s a writer and she’s a homemaker/home-renovator. Him is a good twenty years older and suffering from a horrible case of writer’s block. Mother is hopelessly devoted and encouraging despite his floundering. The couple live in Him’s home which had been burnt to the ground in a horrible fire when Him was much younger. Lawrence’s character had rebuilt the entire home and was near completion of this monstrous undertaking.

Ed Harris, in the role of “Man,” arrives at the home way out in the middle of nowhere. He is under the impression that the house is bed and breakfast. Oddly, invites Man to stay. This is where it hangs a left and keeps ongoing. It isn’t long before Man’s wife, Woman {Michelle Pfeiffer), arrives, followed by their two adult children.

Talk With Other Viewers About This Film & More at Fright Club ?

The two sons, involved in an argument over a will quickly turn to fisticuffs and in short time one bludgeons the other to death. Bardem (Him) invites the morning family to stay where they invade and begin to destroy the home. Mother is insistent that they leave, yet Him resists. Eventually they do go and Mother takes on repairing the damage successfully with the exception of a blood spot on the floor that cannot be cleaned away.

Things seem reasonable for quite a while. becomes pregnant, and conquers his writer’s block, turning out what appears to be a masterpiece. Fans of his work begin to arrive at the remote farmhouse in droves, and this is where it turns all Rosemary’s Baby Gone Wild.

Aronofsky Has Changed the Rules!

All this said I liked the film quite a bit. Just a word of caution, Aronofsky has taken every step to ensure that you are as confused about what is occurring as Mother is and it delivers.

Cast your vote for the Scariest Horror Movie of 2019 VOTE