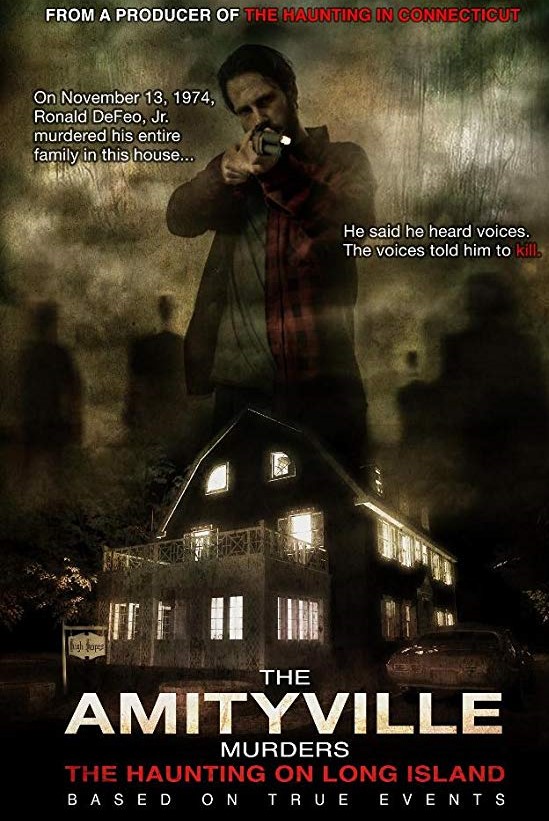 That’s the real question here. In a franchise that released its film in 1979 and has had the ? beat out of it with low budget sequel after sequel, hasn’t this story reached its limit? I mean Forty years of B-rated wannabes, it may just be time to bury the thought of another Amityville anything in the Indian graveyard the house is said to be built upon. Or, does director/writer Daniel Farrands have a trick up his sleeve in the Amityville Murders that could make this installment a pinnacle addition to this never-ending tale of terror.

I’ve stood of this house

Growing up on Long Island we all have a connection to this house. Sadly, I’m old enough that I can actually even vaguely remember bits and pieces of the stories on the DeFeo murders from snippets in Newsday as the trial ensued. Even into the 90s, when I had kids of my own, I would take them Trick or on Ocean Avenue. Then the Dutch Colonial at 112 being the final door to knock on (no one ever would answer) before going home to watch Stuart Rosenberg’s rendition of Jay Anson’s tale.

They Didn’t All Suck!

Okay, I didn’t want to go into this really, but it is important to the story. I did say that this is number twenty-four as far as installments go, that is if you include brief reference in Conjuring. The Amityville Horror (1979) I thought was fantastic. I Also enjoyed Amityville ll: The Possession (1982). I think Amityville 3D (1983) starring Lori Loughlin and Meg Ryan, was the beginning of a spiraling descent into a low budget abyss. That is until the 2005 remake of the original starring Ryan Reynolds would temporarily resurrect the notion of High Hopes in Horror.

What’s with all the F**king Movie Trivia

This is THE story!! I mean the actual story. I’m not talking about the one the Lutz family tells, but the one that Newsday (Long Island’s Newspaper) told back in 1974. This is the story about the murders that occurred in the house before The Amityville Horror. It is the missing component in the franchise.

Amityville ll: The Possession alluded to the DeFeo murder’s more than probably any of the others, but this, like the others, was not a story on the murders. It too was a haunted house story and involved a family and encounters just like the many that would follow.

In the role of Louise DeFeo is Diane Franklin (The Last American Virgin, Better Off Dead), who you may remember from her portrayal of Patricia Montelli in Amityville ll: The Possession (1982). Burt Young (Rocky and a million other great films) who had also appeared in the first sequel of the original, stops in for a brief cameo as well.

Kudos the Daniel Farrands who tells this story the way it needed to be told and probably very close to the way it occurred. This is not the story of a home that was built upon an Indian burial ground. Or, a story of the possession of a young man driven to kill his family at the command of a malevolent spirit. This is the story of an entire family at the mercy of domestic violence.

John Robinson plays the role of the tormented Ronnie (Butch) DeFeo masterfully. A heroine addicted out of work twenty-something. Pressured and at times abused both verbally and physically by his father (Paul Ben-Victor), everyone has a breaking point.

I think Robinson does a fantastic job illustrating the fall and crash of an individual due to the aftermath of long term abuse. The supernatural events that occur throughout the home were more likely limited to the confines of Butch DeFeo’s head. Hallucinations and disembodied voices symptomatic of the illness and subsequent drug abuse that plagued him. The way the character is portrayed, you can’t help but feel empathy for DeFeo.

A Monster in the House

Chelsea Ricketts (Crooked Arrows) who plays Dawn DeFeo does an amazing job as the doting sister. Not unscathed herself, her pain is visible as she witnesses her brother take the brunt of the abuse. Franklin also does a fantastic job in her role as a battered wife walking on eggshells and in near-constant attempt to pacify. This is not at the forefront of the film but is definitely present and it is evident she was a strong woman who had become skittish through conditioning at her husband’s hand.

Yes, there is some paranormal supernatural scary-ass ? that happens, or does it. Go into this one with the mindset that it is NOT a story about a haunted house. This is the story about how the house became haunted and one that I agree needed to be told.

this. Not only could this happen in real life, did. If you don’t watch The Amityville Murders you will be missing the most important installment in the franchise.

NOTE: Diane Franklin was scheduled to be with us today and share a few words on the film, unfortunately, due to the fires currently sweeping through California, she will have to reschedule. She did ask that we share a quick word on The Amityville Murders “I love the film and just tell fans that I’m incredibly proud to be in it and hope they watch it!”

See what other Horror Addicts had to say at Fright Club